The prostate is a small gland specific to men, located beneath the urinary bladder and wrapped around the urethra. The healthy human prostate is slightly larger than a walnut and although it is called a gland, since it is made of two lobes completely surrounded by an outer tissue layer; the term “organ” is a more fitting description. With the process of aging, it is quite common for the prostate gland to become enlarged.
Symptoms of enlarged prostate include difficulty to urinate, increased frequency of urination, slow urine flow, difficulty to start urination despite increase in urgency to urinate, the urine flow starts and stops without completely emptying the bladder.

Medicinal treatment for reducing enlarged prostate may involve drug supplements such as antibiotics to shrink or relax the prostate or bladder. Sometimes however men may take drug supplements for a long period of time without any true benefit.
If you however believe in alternative medicine, you could go down that route and try some clinically proven natural herbal remedies and homeopathic remedies that have been shown to promote prostate health in a natural manner without harmful side effects. Here are some suggested herbal remedies to try for reducing enlarged prostate:

Selenium in the earth’s crust finds its way into plants, then works its way up the food chain. In general, the best sources of selenium are whole grains, tomatoes and other vegetables, seafood, nuts (particularly Brazil nuts), garlic, and onions; meat and poultry also provide significant amounts. There is an interesting article in the Harvard Health blog:  To learn if selenium supplements might reduce the risk of recurrent skin cancer, a team of scientists working at seven American health centers gave either 200 micrograms of selenium or a placebo to 1,312 volunteers with an average age of 63. When the results were analyzed in 1996, the researchers were disappointed to learn that there was no difference in the occurrence of skin cancer in the two groups, but they were startled to find that selenium was linked to a significant reduction in deaths from lung, colon, esophageal, and prostate cancer; protection appeared strongest for prostate cancer, with 63% fewer deaths in the men who took selenium. Get additional information on Selenium and its cancer fighting abilities from www.ThatsSuperFood.com

Adding red raspberries, a small, sweet berry, to your cereal or eating them raw may have special benefits for men when it comes to prostate cancer, a disease that affects one in six American men, according to the American Cancer Society.
Red raspberries contain a compound known as ellagic acid, a phytochemical that also provides antioxidant protections. A study published in the July 2011 issue of the “Asian Pacific Journal of Tropical Medicine” looked at ellagic acid’s effect on prostate cancer cells in a laboratory setting. Researchers found that this acid inhibited cell growth activity, suggesting that raspberries could serve as a potential therapy for reducing your risk of prostate cancer or slowing its development. More research is needed to confirm the usefulness of red raspberries and ellagic acid for this purpose.

As early as 1976, studies have been performed seeking to discover the healing powers of graviola. One of the earliest studies was a plant-screening program by the National Cancer Institute. The leaves and stems of graviola showed to be very effective in fighting cancer cells. Researchers have been following up on these findings ever since.

Three separate research groups have isolated these acetogenin compounds in graviola, which have shown significant anti-tumorous and anti-cancerous properties, and an active killer of various types of cancer cells (without harming healthy cells).

In 1997, Purdue University published information with promising news that several of the Annonaceous acetogenins ” . . . not only are effective in killing tumors that have proven resistant to anti-cancer agents, but also seem to have a special affinity for such resistant cells.” Purdue has conducted a great deal of the research on the acetogenins, much of which has been funded by The National Cancer Institute and/or the National Institute of Health (NIH).

Purdue University and/or its staff have filed at least nine U.S. and/or international patents on their work around the anti-tumorous and cancer fighting properties of these acetogenins. In one of their reviews, titled “Recent Advances in Annonaceous Acetogenins,” they state:

“Recently, we reported that the Annonaceous acetogenins can selectively inhibit the growth of cancerous cells and also inhibit the growth of adriamycin resistant tumor cells. As more acetogenins have been isolated and additional cytotoxicity assays have been conducted, we have noticed that, although most of acetogenins have high potencies among several solid human tumor cell lines, some of the derivatives within the different structural types and some positional isomers showed remarkable selectivities among certain cell lines; e.g., against prostate cancer.” 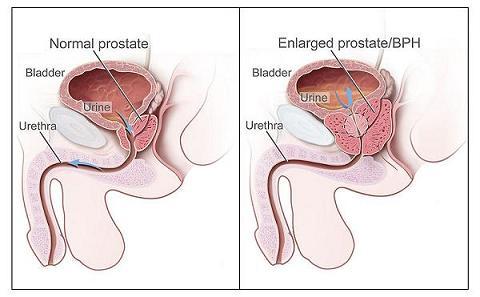 Green tea has been used as a medicine for over five thousands years in Chinese medicine. The plant, called Camellia sinensis, has been used to treat many health issues. The tea has been known to lower cholesterol, cure headaches, improve cognition in Alzheimer’s patients, dissolve blood clots, speed fat burning and increase metabolic weight loss, and cure depression. Recent studies have now indicated that green tea can reduce prostate cancer.

According to the University of Maryland Medical Center  test tube studies indicate that cat’s claw may stimulate the immune system, help relax the smooth muscles (such as the intestines), dilate blood vessels (helping lower blood pressure), and act as a diuretic (helping rid the body of excess water). It also has antioxidant properties, helping rid the body of particles known as free radicals that damage cells. Preliminary studies show it may have antitumor and anticancer effects as well.

Saw palmetto is the most popular herbal remedy used in the natural treatment of enlarged prostate. It is believed that the ripe berries of the saw palmetto shrubs contain compounds that act like 5-alpha reductase inhibitors. These compounds inhibit growth of prostate tissues, triggered by the testosterone hormone.

Bark of African plum tree is another effective herbal remedy. Pygeum is extracted from the bark of the African plum tree which can be very effective in reducing the symptoms of enlarged prostate. Pygeum can also help in the natural healing of urination problems.

Studies have found that pumpkin seeds are a great herbal remedy for enlarged prostate as it prevents the growth of prostate gland. Health vitamins such as carotenoids and omega 3 fatty acids are believed to be beneficial for prostate health.
Zinc is another one of the recommended natural remedies for enlarged prostate. Regular intake of this health supplement about 50 to 100 milligrams could shrink enlarged prostate. This health supplement can also be found in natural health foods such as eggs, meat, whole grains, seafood, legumes, nuts and lentils.

The following supplement contains all of the above ingredients and is know to aid in reducing Enlarged Prostate. Keep in mind that not every nutrient or supplement you swallow is absorbed by your body! Please read carefully the tab on the top of this page called HEALTH RESOURCES! It will explain to you why it is important to take the right supplements and nutrients. Our recommendations below we feel will give you the best possible nutrients and supplements on the market!