Cancer is a terrible disease that has touched almost all of us in some way. It has changed and influenced my life in a big way!  My mother died of cancer when I was 19. She battled cancer during most of my teenage years. I have lost my grandmother, numerous aunts, uncles, and friends to cancer. I grew up with my two younger sisters thinking that none of us were going to live past 40 because of cancer. I know they thought the same thing! I have heard that it is normal for kids to fear that they will die of the same disease that killed their parent.

Cancer affects people at all ages with the risk for most types increasing with age. According to the World Health Organization, 12,000,000 people are diagnosed each year with cancer. Cancer caused about 13% of all human deaths in 2007 (7.6 million).

Cancer is a class of diseases in which a group of cells display uncontrolled growth (division beyond the normal limits), invasion (intrusion on and destruction of adjacent tissues), and sometimes metastasis (spread to other locations in the body via lymph or blood). These three malignant properties of cancers differentiate them from benign tumors, which are self-limited, and do not invade or metastasize. Most cancers form a tumor but some, like leukemia, do not. The branch of medicine concerned with the study, diagnosis, treatment, and prevention of cancer is oncology.

Cancer is a diverse class of diseases which differ widely in their causes and biology. Any organism, even plants, can acquire cancer. Nearly all known cancers arise gradually, as errors build up in the cancer cell and its progeny. 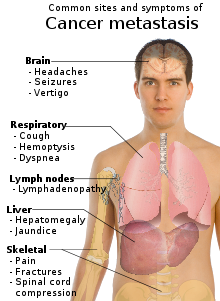 Anything which replicates (our cells) will probabilistically suffer from errors (mutations). Unless error correction and prevention is properly carried out, the errors will survive, and might be passed along to daughter cells. Normally, the body safeguards against cancer via numerous methods, such as: apoptosis, helper molecules (some DNA polymerases), possibly senescence, etc. However these error-correction methods often fail in small ways, especially in environments that make errors more likely to arise and propagate. For example, such environments can include the presence of disruptive substances called carcinogens, or periodic injury (physical, heat, etc.), or environments that cells did not evolve to withstand, such as hypoxia. Cancer is thus a progressive disease, and these progressive errors slowly accumulate until a cell begins to act contrary to its function in the organism.

The errors which cause cancer are often self-amplifying, eventually compounding at an exponential rate. For example:

Thus cancer often explodes in something akin to a chain reaction caused by a few errors, which compound into more severe errors. Errors which produce more errors are effectively the root cause of cancer, and also the reason that cancer is so hard to treat: even if there were 10,000,000,000 cancerous cells and one killed all but 10 of those cells, those cells (and other error-prone precancerous cells) could still self-replicate or send error-causing signals to other cells, starting the process over again. This rebellion-like scenario is an undesirable survival of the fittest, where the driving forces of evolution work against the body’s design and enforcement of order. In fact, once cancer has begun to develop, this same force continues to drive the progression of cancer towards more invasive stages, and is called clonal evolution.

Most forms of cancer are sporadic, meaning that there is no inherited cause of the cancer. There are, however, a number of recognized syndromes where there is an inherited predisposition to cancer, often due to a defect in a gene that protects against tumor formation. Famous examples are:

Cancer prevention is defined as active measures to decrease the incidence of cancer. A great percentage of cancers can be prevented if we do the following:

Our goal is to take each one of these areas and analyze them in detail so we can provide you with a blueprint of the things you should do. We will devote one whole post to each one of the categories, so please check back every week to get the information!