What is celiac disease and is there effective alternative medicine for celiac disease? Celiac disease is a widespread autoimmune disorder of the small intestine that occurs in genetically predisposed people of all ages from middle infancy onward. Celiac disease is caused by a reaction to gliadin, a prolamin (gluten protein) found in wheat, and similar proteins found in the crops of the tribe Triticeae (which includes other cultivars such as barley and rye). Upon exposure to gliadin, and certain other prolamins, the enzyme tissue transglutaminase modifies the protein, and the immune system cross-reacts with the small-bowel tissue, causing an inflammatory reaction. That leads to a truncating of the villi lining the small intestine (called villous atrophy). This interferes with the absorption of nutrients, because the intestinal villi are responsible for absorption. The only known effective treatment is a lifelong gluten-free diet and while the disease is caused by a reaction to wheat proteins, it is not the same as wheat allergy.

Severe celiac disease leads to the characteristic symptoms of pale, loose and greasy stool, weight loss or failure to gain weight (in young children). People with milder celiac disease may have symptoms that are much more subtle and occur in other organs rather than the bowel itself. Finally, it is possible to have celiac disease without any symptoms whatsoever. Many adults with subtle disease only have fatigue or anemia.

How does Celiac Disease Differs from Gluten Sensitivity?

We now know that it is possible to have “gluten intolerance” without necessarly having celiac disease. Even people who are not clinically allergic to gluten (they test negative for celiac disease and don’t appear to have some of the classic signs of not digesting the protein correctly) can experience similar widespread problems when eating foods with gluten, which tend to decrease substantially when they avoid eating it. While rates of celiac disease diagnoses remain relatively low, more and more people are also identifying themselves at sensitive or intolerant to the effects of gluten.

Why this happens? One reason might be an overexposure to gluten, since this stuff is everywhere today! Gluten is included in many processed foods in one form of another and lurks in everything from cookies and cereal to ice cream, condiments and even beauty products. Another reason more people are choosing to stay away from gluten is that knowledge of its effects is steadily rising. The “gluten-free movement” has been growing in popularity — even big-name food manufacturers are now offering gluten-free flours, breads, cereals, etc. There is even gluten-free alcohol nowadays!

There’s also such thing as an allergy to wheat, which is different than an allergy to gluten. People with wheat allergies can also benefit from following gluten-free diets, but they don’t necessarily need to severely restrict rye, barley and oats from their diets like celiac patients do. 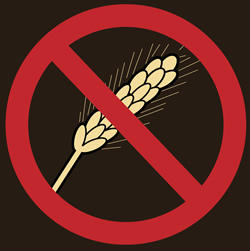 # 1 Digestive enzymes
One that contains DPP-IV. This enzyme can help reduce the reaction to gluten.

We have not found a formula good enough to mention here, so we are not. If you have one, please share it with us and we will look into it.

#3 Multivitamin
Can help provide essential nutrients the diet may lack.

#6 B- Complex
Research shows that patients with longstanding celiac disease, whose absorption of nutrients has been impaired by the disease, have significant and faster improvement in their overall health when their gluten-free treatment is augmented with B-vitamin supplementation. These are already included in the Total Multivitamin, so you do not need to take an additional supplement.