80% of diabetic patients will die of an atherosclerotic event such as heart attack or a stroke.

(According to medical journals (1,2))

That is an amazing statistic. That means that if you are a diabetic, you have an 80% chance that you will die from an event caused by atherosclerosis. So what is atherosclerosis and what can we do about it?

What damage does atherosclerosis cause?

Plaque may partially or totally block the blood’s flow through an artery in the heart, brain, pelvis, legs, arms or kidneys. Some of the diseases that may develop as a result of atherosclerosis include coronary heart disease, angina (chest pain), carotid artery disease, peripheral artery disease (PAD) and chronic kidney disease.

Two things that can happen where plaque occurs are:

If either of these occurs and blocks the artery, a heart attack or stroke may result.

Atherosclerosis affects large and medium-sized arteries. The type of artery affected and where the plaque develops varies with each person. 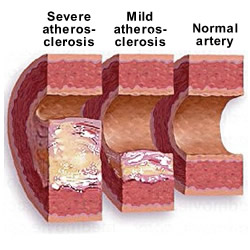 Atherosclerosis is a slow, progressive disease that may start in childhood. In some people the disease progresses rapidly in their 30s. In others it doesn’t become dangerous until they reach their 50s or 60s. However, it is normal to have some hardening of the arteries as you get older.

How does atherosclerosis start and progress?

It’s a complex process. Exactly how atherosclerosis begins or what causes it isn’t known, but some theories have been proposed. Many scientists believe plaque begins to form because the inner lining of the artery, called the endothelium, becomes damaged. Three possible causes of damage to the arterial wall are:

Because of the damage, fats, cholesterol, platelets, cellular debris and calcium accumulate over time in the artery wall. These substances may stimulate the cells of the artery wall to produce other substances, resulting in the accumulation of more cells in the innermost layer of the artery wall where the atherosclerotic lesions form. These cells accumulate, and many divide. At the same time, fat builds up within and around these cells. They also form connective tissue.

The arterial wall becomes markedly thickened by these accumulating cells and surrounding material. The artery narrows and blood flow is reduced, thus decreasing the oxygen supply.

Researchers have discovered how diabetes, by driving inflammation and slowing blood flow, dramatically accelerates atherosclerosis, according to research to be published in the March 14 edition of the journal Circulation Research.

Experts once believed that atherosclerosis, or hardening of the arteries, developed when too much cholesterol clogged arteries with fatty deposits called plaques. When blood vessels became completely blocked, heart attacks and strokes occurred. Today most agree that the reaction of the body’s immune system to fatty build-up, more than the build-up itself, creates heart attack risk. Immune cells traveling with the blood mistake fatty deposits for intruders, akin to bacteria, home in on them, and attack. This causes inflammation that makes plaques more likely to swell, rupture and cut off blood flow.
Making matters worse, nearly 21 million Americans have diabetes, a disease where patients’ cells cannot efficiently take in dietary sugar, causing it to build up in the blood. In part because diabetes increases atherosclerosis-related inflammation, diabetic patients are twice as likely to have a heart attack or stroke.
Past work has shown that high blood sugar has two effects on cells lining blood vessels as part of atheroslerosis. First, it increases the production of free radicals, highly reactive molecules that tear about sensitive cell components like DNA, causing premature cell death (apoptosis). This process also reduces the availability of nitric oxide (NO), which would otherwise enable blood vessels to relax and blood flow to increase.
In contrast to diabetes, exercise and good diet bring about faster blood flow through blood vessels. The force created by fast, steady blood flow as it drags along blood vessel walls has been shown by recent studies to protect arteries from atherosclerosis. Physical force has emerged recently as a key player in bodily function, capable of kicking off biochemical processes (e.g. weightlifting thickens bone).

What natural ways can reduce Atherosclerosis?

Many of our most powerful medicines, including those for diabetes, chemotherapy, and cardiovascular health, are derived from plant extracts. One reason that plants hold so much potential for human health is that they are able to withstand a variety of destructive forces such as environmental radiation, oxidative damage, and chemical toxins due to their unique ability to manufacture complex molecules called flavonoids. For humans, these same conditions can be lethal. Yet when we consume plants as food and beverages, the protective benefits of these same flavonoids are readily transferred to our bodies!

One flavonoid in particular, quercetin, is found in a broad range of foods, from grape skins and red onions to green tea and tomatoes. Quercetin is attracting intense scientific interest for its unique anti-aging and immune-boosting activities.6 Several recent studies show that organisms exposed to high levels of quercetin live longer, healthier lives. Laboratory models of aging, ranging from simple yeasts and primitive worms to cultured human cells, demonstrate that quercetin alone produces up to a 60% increase in life span! In addition, quercetin has been found to be cancer chemopreventive as well as reduce allergic reactions, boost immunity, and protect the cardiovascular system.

Sources for this article include: