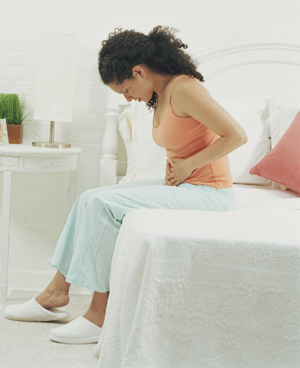 Endometriosis is a painful condition in which uterine tissue, attaches itself to other organs. This uterine tissue may appear on the fallopian tubes, the ovaries, or on the outer walls of the uterus. In some rare cases this tissue travels and attaches itself onto the lungs, bladder, and other areas. The buildup of this tissue alone is painful, but as the tissue continues to act as though it were inside of the uterus, it fills up with blood over the course of a menstrual cycle, and then every month they shed blood, just as the uterus does.

Unlike regular menstrual blood which leaves the body through the vagina, this blood has no where to go, so it builds up in the pelvic cavity, where often times it forms cysts. As this process is repeated each month the cysts grow larger, and can eventually a cysts may rupture which causes excruciating pain.

Endometriosis affects women in their reproductive years. Since many women have endometriosis but feel no symptoms the exact prevalence of this condition is not known.

It is is estimated that endometriosis affects over one million women in the United States alone. Endometriosis is one of the leading causes of pelvic pain and one of the leading reasons for laparoscopic surgery and hysterectomy in this country. Most women are between the ages of twenty-five, and thirty at the time of diagnosis, but, endometriosis has been reported in girls as young as 11 years of age. Cases of postmenopausal women getting endometriosis is rare. Some studies have shown that there is a higher prevalence of endometriosis in white women as compared with African American and Asian women.

What are the Symptoms of Endometriosis?

Symptoms of endometriosis are pain in the abdomen and lower back, which is usually associated with menses. Pain during sexual intercourse, anemia, nausea, and vomiting, infertility, prolonged or excessive menstrual bleeding, and pain with urination, and bowel movements are also common symptoms of endometriosis.

What are the Root Causes of Endometriosis?

A genetic defect, hormonal imbalance meaning, high estrogen and low progesterone, which could in itself be causes by poor liver function, ovulatory dysfunction, and a poor diet. Retrograde menstruation, imbalanced flora, and immune system are also root causes of endometriosis.

Eating a organic diet is the number one most important thing you can do for yourself if you have endometriosis. The pesticides, herbicides, and hormones in non-organic meats, are very aggravating for endometriosis. Consume a lot of whole grains, vegetables, and fruits. Avoid or limit your dairy and meat consumption.

Also, limit the amount of sugar and refined foods. these food stimulate inflammation, which would irritate your endometriosis, and increase pain. Applying castor oil to a wool flannel cloth and placing that on a heating pad, applied to the pelvic area helps to soothe the pain from endometriosis.

*Please check with your doctor before taking any supplements, and also read the warning labels on each product, especially if you are pregnant or breast-feeding. Also read the labels carefully when giving your child any natural supplement, to ensure that it is safe to give a child.